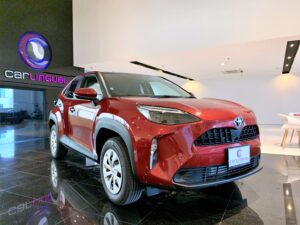 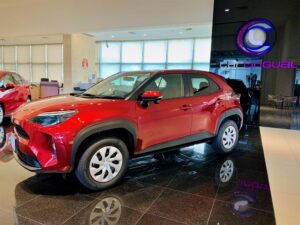 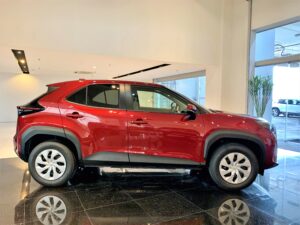 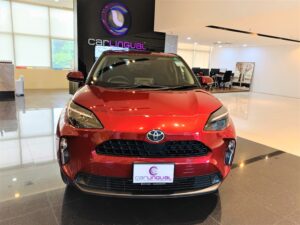 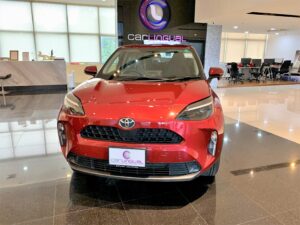 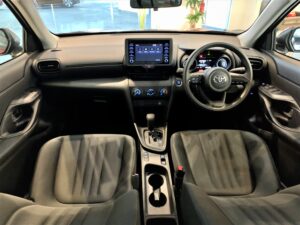 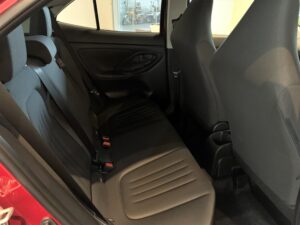 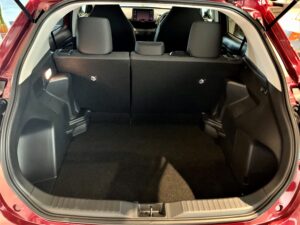 A new style of sophisticated yet powerful compact SUV

An outstanding presence with a powerful suspension that is typical of an SUV.

A space with comfort and functionality that changes everyday life

A room that pursues comfort as well as functionality so that you can spend your daily life actively. The calm colour schemes created a comfortable and high-quality space at all times.

The Yaris Cross XB makes a bold statement no matter which angle you look at it. Made to catch the eye of any one who passes it.

It has a higher ride height than any conventional hatchback, making it the perfect hatchback for all your on-road and off-road activities.

Toyota pursued a smart and energetic design for the Yaris Cross with a robust and minimalist concept coupled with aesthetically balanced proportions.

The new LED headlights of the Toyota Yaris Cross XB provides a clear view of the road ahead. The feature senses oncoming vehicle headlights and adjusts the light so that the oncoming driver is not blinded by your headlights.

LED Daytime running lights are integrated into the headlight clusters of the new Toyota Yaris Cross XB which make it easier for other motorist, pedestrians, cyclist to notice your vehicles presence on the road there by protecting your vehicle.

To provide higher visibility the Toyota Yaris Cross XB LED taillight is tailored with several light bulb systems, This LED tail lights typically emit a series of small, often bright glittering lights which makes it easier for the vehicles to be seen in the dark by drivers trailing behind other vehicles.

When the reverse gear is engaged it automatically activates and displays the vehicle’s area with dynamic guidelines on its central screen.

The dynamic guidelines in the media display give drivers a clear direction and orientation when reverse parking and maneuvering.

The Toyota Yaris Crosses side mirrors folds and unfolds with a remotely controlled switch when the vehicle ignition is ON thereby giving the driver ease of use.

The Yaris Cross has controls to adjust and tilt the side mirrors which enhances the drivers view from the side and behind the vehicle.

To improve driving safety the vehicle has LED side turning lamps.

Toyota Yaris Cross XB with its 4.2- inch Multi-Information Display keeps you updated on the go.

It Displays different information and messages that help the driver more comfortably operate the vehicle using the Display panel located on the instrumental panel.

The mode switch feature allows you to switch between ECO-drive mode and EV-drive mode which gives the driver a more personalised driving experience.

In the ECO-mode the Yaris Cross XB increases its fuel efficiency by reducing acceleration levels without impacting the engine’s power, and if the vehicle is in the Electric Vehicle (EV) mode it only draws power from the battery.

The 7-inch multimedia display in the Toyota Yaris Cross XB is integrated with Apple CarPlay and Android Auto making the journey filled with entertainment and information.

The system allows the driver to instantly access to the smartphone features and voice control features by means of user-friendly infotainment system. It also features a floating display availability that provides the best viewing angles for the user.

The 3- speed steering wheel Toyota Yaris Cross XB is finished in Urethane that offers a comfortable grip and works with other controls.

With its 3-spoke design you can hold your hands and get the ‘3-9’ position, giving you a better-relaxed position while driving.

A Split-folding Rear Seats gives you more flexibility in handling the Yaris Cross XB’s interior function. It is very useful when you want to carry numerous passengers with large cargo capacities.

The entire back seat can be folded entirely or partially when you want room for both passengers and cargo.

The Yaris Cross XB contains 12V power socket which is ideal for low-powered gadgets and other devices may be used on your journeys.

The power socket is waterproof and dustproof sealed with a rubber cover which protects the internal circuit and improves its lifespan.

The Toyota Yaris Cross XB provides both the driver and passenger ergometric cup holders to put their hot or cold beverages while on the road.

The cup holders keep the cups secure and within reach thereby allowing you to concentrate on the road.

The Toyota Yaris Cross XB’s Airbag system enhances its seat belt system and improves passenger safety, The Yaris Cross XB comes with 7 SRS Airbags which are deployed at the speed of 100 to 300 km/h to ensure quick response in the event of an emergency.